Diamond Drilling Concrete Sawing demolition contractors Holemasters has been contracted by H Smith (Engineers) to aid the demolition of the Natwest Tower in Birmingham.

The building nestles tightly between neighbouring office buildings on corner of Colmore Row and Newhall Street in central Birmingham. Demolition work began on this iconic 26 storey building late March 2016. Concrete Diamond Drilling and sawing specialists Holemasters has now commenced the cut and carve demolition on the West core. This is due for completion in December 2016.

Due to the restrictions in size and position of the site demolition has taken a phased approach. This has involved taking out the West core by means of saw cutting the sheer walls using a 3 phase high frequency track saw. The cut sections have then been craned out piece by piece. This has effectively reduced the floors, floor by floor. 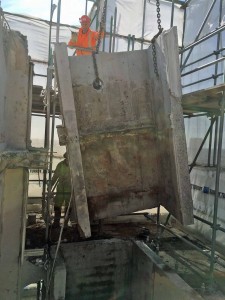 Demolishing of the West core piece by piece.

Holemasters’ Contracts Manager, Chris Eaton said: “This D-build approach is part and parcel of the work that we do.  This is because we have the necessary demolition diamond drilling concrete sawing skillset. We also have the  knowledge and understanding of a building fabric to ensure this type of methodology is carried out safely to budget and programme.

“Such a tall building as the Natwest Tower, situated as it is in the middle of the City Centre, brings with it its own set of challenges.

“Conventional demolition machines have been used for the main debuild. However, because of the proximity of the West core to other buildings and its confined space this has restricted any movement of large pieces of equipment. This is why we have introducing a staged ‘piece by piece’ approach. This avoids vibration which could have potentially damaged the structural integrity of surrounding buildings. Noise has been reduced for the comfort of local residents, general public and office staff. It also avoids water ingress into neighbouring buildings.

“As the cut and carve process progresses, a tower crane secures and removes each cut section. Over a total of 26 floors this is quite a feat and good on-site communication and team work is a priority.”

Phase two works will commence early January 2017 with Holemasters poised to secure these works to the three basement levels.